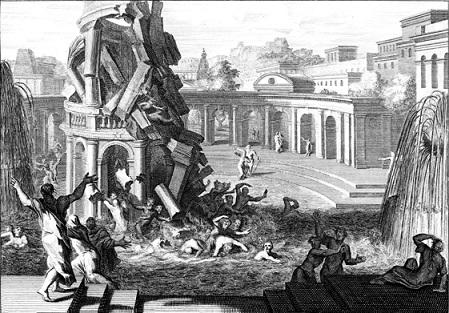 Challenging Thoughts
“EVERY ONE OF YOU WILL ALSO DIE!”

"About that time some people came up and told Him about the Galileans Pilate had killed while they were at worship, mixing their blood with the blood of the sacrifices on the altar. Jesus responded, 'Do you think those murdered Galileans were worse sinners than all other Galileans? Not at all. Unless you repent and turn to God, you too will die and be lost eternally. Or those eighteen on whom the tower in Siloam fell, Do you think that they were more sinful than other people living in Jerusalem? Not at all! But you can be sure that if you don't repent and turn back to God, every one of you will also die.'" (Luke 13:1-3)

[NOTE: Nothing said here is meant to minimize or disregard the human tragedies constantly happening in our  crazy world.]

After His resurrection and before He left this world, Jesus gave “The Great Commission”—“Go into all the world, make disciples, and teach them everything I taught you”—as the perpetual marching papers and spiritual charge for His disciples and their converts for all time, until He comes back again. His promise, “Behold, I Am with you always, even to the end of the world,” lets us know that this charge is to be the church’s primary reason for existence as long as the world stands. And the church, by and large, has followed this Commission, which is why there are 2.382 billion of us in the world today, although many of that number are cultural Christians only, not knowing Jesus as their personal Savior at all.

HOWEVER, throughout history, Christians, individually and collectively as the CHURCH, have been continually distracted by social and political attitudes and events prevailing in the world around them. This is the real reason for the existence of cultural Christians and the reason for there being “only” 2.382 billion and not 5 or 6 billion Christians in the world. We continually have allowed ourselves to be distracted from our primary purpose: TO SEEK AND TO SAVE THE LOST. This was Jesus’ sole purpose—when He was here and after He left and delegated this purpose to His disciples in the Great Commission.

One of the main ways in which we allow ourselves to be distracted is by taking up worldly issues, social causes, political positions, and the like. We fall in love with our lifestyles, freedoms, privileges, comforts and conveniences, and manage to attach and associate that lifestyle to the Kingdom of God. Then, when that lifestyle is attacked or threatened, we interpret those threats to be against Christianity, God, and His Kingdom. We then use the Bible to justify the defense of our lifestyle and spend a lot of time and energy on fighting to obtain or maintain our political clout. We start preaching more about presidential elections than about the Gospel of Jesus Christ.

Then, when we see gross injustices, inequality, and other social ills that need to be righted, we adopt those causes because they sound nice. Also, we don’t want to be called “racist” or get “cancelled” by the “woke” politically-correct crowds seemingly running the show. Social Justice is the doctrine of the day.

But these are the facts regarding popular social issues: Governments misuse and abuse people all the time. Always have and always will. Trying to get the government to stop misusing and abusing people, in the end, is futile. Here in America, at the very hour a Minneapolis, MN, judge was announcing guilty verdicts against one cop for killing a black man, in Columbus, OH, a 16-year-old black girl was being shot to death by another cop. And there were other infamous cases in the weeks following. We want “justice” for them, whatever that means, because if justice requires restoration, there’s no way to restore their lives and bring about that kind of “justice.” But away we go anyway, the church joining in the ubiquitous calls for “justice” and “equality,” adding our voices, resources, and influence to an effort to bring about something that NO amount of collaboration, social action, or political clout can possibly produce WITHOUT GOD! The prophet Jeremiah concluded over 2500 years ago, “I know, GOD, that mere mortals can't run their own lives, That men and women don't have what it takes to take charge of life. It is not in man to direct his own steps” (Jeremiah 10:23). Only Jesus within brings true justice: “His power will never end; peace will last forever. He will rule David's kingdom and make it grow strong. He will always rule with honesty and justice” (Isaiah 9:7). And, “Someday, says the Lord God, I will appoint an honest king from the family of David, a king who will be wise and rule with justice” (Jeremiah 23:5).

The biggest problem is that while we are out screaming for justice, we are not getting anybody saved. We have been successfully distracted.

Now why would I choose to go against the popular, politically correct, and even religiously-correct position to think and say all this here? It is because this comes from Jesus Himself. In Luke 13:1-5, Jesus concisely, almost insensitively, points out the most important matter in life. This was NOT a parable but actual events: “There were some present at that very time who told Him about the Galileans whose blood Pilate [the governor] had mingled with their sacrifices. And He answered them, ‘Do you think that these Galileans were worse sinners than all the other Galileans, because they suffered and were killed in this way? No, I tell you; but unless you repent, you will all likewise be killed and perish. Or those eighteen on whom the tower in Siloam fell and killed them: do you think that they were worse offenders than all the others who lived in Jerusalem? No, I tell you; but unless you repent, you will all likewise perish.’” (13:1–5). Or, as it reads in the Contemporary English Version, “But you can be sure that if you don’t turn back to God, every one of you will also die.” Doesn’t matter HOW you die or WHEN. If you have not repented and turned back to God, then Jesus makes it clear that you will “perish,” meaning, YOU WILL BE LOST ETERNALLY! THAT IS THE ONLY THING THAT REALLY MATTERS!

This is exactly what is happening in our world: The government or its representatives continually abuse sometimes-innocent citizens, sometimes people just going about their everyday lives, or even, as in the above story, in the act of worshipping and doing good. Good people just minding their own business. Poor autistic kids just walking home, bothering nobody. Or some man just sitting at home eating ice cream on the couch. Or lying asleep in their beds. Good people just unlucky enough to be at the wrong place at the wrong time. No different than you and me. Shot by the cops or in some tragic mass killing. Surely these flagrant injustices require the combined efforts of all good people everywhere to fight for justice, right these wrongs, and bring about equality, love, and peace, so “this never happens again!” Surely this will be the new way to do God’s work in the world. Surely if you don’t jump on this worthy cause, this socio-political bandwagon, you are missing the Gospel of Jesus Christ. Surely this justifies the dramatic polarization we now see in society and even in the CHURCH itself, heaven forbid!

But, surely, you are missing the Gospel of Jesus Christ if you DO jump on this bandwagon. CONTRARY TO POPULAR OPINION, THE CHURCH IS NOT HERE TO RIGHT THE INJUSTICES OF SOCIETY! (Man, will I be excoriated for that statement!)  SOCIAL JUSTICE IS A NOBLE CAUSE, BUT IT IS NOT THE CALLING OF THE CHURCH!

True change can’t happen without God producing millions of individual spiritual miracles. Marching and protesting and being violent or loud is not His way. Injustice will remain indefinitely because it all comes from the HEARTS of people, and the human heart is limitlessly EVIL! The people out marching against the evils in the world also have evil in their own hearts, so it’s just a matter of “the pot calling the kettle black." Simply can NOT happen, no matter how excited we get, how hopeful we are, or how hard we work. Want proof? Dr. MLK, Jr worked tirelessly for years to bring about social change and racial justice, and in many ways, he was successful. However, racism, individually and collectively, appears to still be here today, raising its ugly head whenever it gets the chance because racism resides in the heart!

So, GOD’S way is to change people from the inside out, purifying hearts and minds and morals and consciences and, thus, behavior. This is the ONLY way to bring about true social change. And that’s what the church should be concentrating on right now. But we are distracted.

Jesus wants His church to concentrate on changing the inner man and making it right. Put ALL its hopes in SAVING and HEALING the SOULS of men and women, boys and girls. And even the precious souls of that increasing number of people who claim to be neither men nor women or have changed themselves from one to the other. Everyone of us is equally doomed—without God. Everybody is an eternal soul that needs to meet its Creator and experience His LOVE before it leaves this world. Otherwise, “You shall all likewise perish!”

No matter how hard people try to cooperate and collaborate, human beings themselves cannot legislate or bring about justice or righteousness or morality or love or peace or treating your neighbor right. Achieving those divine goals will never happen from any number of efforts from human fleshly minds. Those goals are the fruit of an inner spiritual miracle caused by knowing Jesus Christ in the Spirit, NOT cultural Christianity. We cannot bring back what we call “the good old days” or “Make America Great Again,” because during the time when our society was indeed more morally upright than now, it was not legislated or collaborated. It was the simple result of having a greater proportion of morally-conscientious, spiritually upright, God-fearing individuals in our midst.

Following is the church’s blueprint to radically change society:

STRATEGIZE on how to get God’s LOVE over to those who have never FELT it in ways and by means we’ve never used before,

START FUNDING efforts to change people one life or family at a time,

REJECT the tendency to spend most of God’s money on buildings and religious doo-dads,

RENOUNCE THE RAMPANT HYPOCRISY IN OUR MIDST, and

START ACTING LIKE JESUS, Who gave us precisely the bottom line, paraphrasing: “Unless you repent, nothing else matters!”